Karleigh Bon's Multiverse
Out of the forest: into the light...
ALL TEH POSTS / Bonus stuff

The Quern narrated by Karleigh Bon

Who knew grinders could be so much fun, and brothers could be such a problem to one another. The man with the ham stuck to the plan… ehhem. Merry Holidays Friends… Don’t forget season three of, “Tales of Eldelórne, book One,” starts up again on January 7, 2021. You might want to click that follow button.

You can buy, Tales of Eldelórne: Book One, at www.amazon.com/~/e/B0821N7DPH right now on kindle or 437 pages of high quality paper back.

Give the gift of support, It is always appreciated, so I can just tell the story!

The Quern that Stands Milling on the Bottom of the Sea

Once in the old olden days, there were two brothers, one of whom was rich and the other poor. When Christmas Eve came, the poor one had not so much as a crumb of food in his house, neither milk nor bread, and so he went to his brother to ask for some for Christmas, in God’s name. It was not the first time his brother had to give him some; measured was he always, but he was not too much fond of him now, either.“If you will do what I ask you, then you shall have a whole hock of ham,” he said. This the unfortunate one promised on the spot, and he thanked him for it.

“Here you have it; go straight to hell!” said the rich one, throwing the ham to him.

“Well, what I have promised, I must keep,” said the other. He took the ham and set off.

He walked and he walked the whole day, and at twilight he came to a place that shone so beautifully. You shall see it is here, thought the man with the ham. Out in the woodshed stood and old man, chopping firewood for Christmas.

“Good evening,” said he with the ham.

“Good evening to you! Where are you off to so late?” said the fellow.

“I am most likely going to hell, if I am on the right road,” replied the poor man.

“Yes, you have gone right enough; it is here,” said the other. “When you come in, the others will want to buy your ham, for flesh is seldom fare in hell; but you must not sell it unless it is for the hand quern that stands behind the door. When you come out again, I shall teach you to stop the quern; it is useful for this and that, it is.”

Well he with the ham thanked him for the good guidance, and knocked on the devil’s door.

When he came in, it went as the old man had said; all the devils, both big and small, surrounded him like ants and worms, and the one overbid the other for the ham. “Sure enough, my wife and I were to have it for dinner on Christmas Eve, but since you are so eager to have it, then I shall relinquish it,” said the man. “But if I am to sell it, then I want the hand quern that stands behind the door over there.” This the devil would rather not lose, and he bargained and haggled; but the man held by his demand, and so the devil had to give him it.

When the man came out into the yard, he asked the wood cutter how he should stop the quern, and when he had learned to do so, he thanked him, and set off homeward as quickly as he could; but even so, he did not arrive before the clock struck twelve on Christmas morn.

“And where on earth have you been, then?” said his wife. “Here have I been sitting, hour out and hour in, yearning and waiting, with not so much as two sticks to place in a cross beneath the Christmas porridge cauldron.”

“Oh, I could not come before; I had a little of everything to get, and a long road I had, too. But now you shall see!” said the man. He put the quern on the table, and asked it first to mill candles, then a cloth, then food, and beer, and everything that was good food on Christmas Eve; and according to what he told it to, the quern milled it.

His wife crossed herself time after time, and wanted to know where the man had got the quern from, but he would not tell; “it does not matter where I got it; you see the quern is good, and the quern water does not freeze,” said the man. Then he milled food and drink and all good things for the whole of Christmas; and on the third day, he invited his friends, for he wanted to hold a feast.

When his rich brother saw everything that was at the feast, he grew both angry and wild, for he could not wish his brother anything good. “On Christmas Eve, he was in such want that he came to me and asked for a little in God’s name, and now he holds a feast, as if he were both a count and king,” he said.

“But where in the heat of hell have you got all your riches from?” he said to his brother.

“Behind the door,” said he who owned the quern; he did not care to give him an account for it.

But in the evening, when a little had gone to his head, he could not help himself, and he brought the quern forth. “There you see what has brought me all this wealth!” he said, and then he let the quern mill both this and that.

When his brother saw it, on his life, he wanted it, and after a long, long time, he should have it, too, but three hundred dollars would he have to give for it, and then the other should have it until the haymaking season, “for if I have it for so long, then I will be able to mill food for many years,” he thought. In that time, you can imagine the quern did not grow rusty, and when the haymaking season came, his brother got it; but the other had been very careful not to teach him how to stop it.

It was in the evening that the rich one brought the quern home, and in the morning, he bade his wife go out and help the haymakers; he would make the meal himself today, he said.

When meal time came around, he put the quern on the kitchen table. “Mill herring and gruel, and that both quickly and well!” said the man. And the quern began to mill both herring and gruel, first so that all the plates and troughs were full, and then across the whole kitchen floor. The man fiddled and poked and tried to get the quern to stop, but no matter how he turned and fingered it, the quern continued, and in a little while, the gruel reached so far up that the man was close to drowning. Then he pulled open the parlour door, but it was not long before the parlour was full too, and it was a close thing that the man was able to grasp hold of the catch, down in the deluge of gruel. When he opened the door, he was not long in the cabin, I would not think; he ran out, and herring and gruel came after him so that it flowed out across both farm and fields. 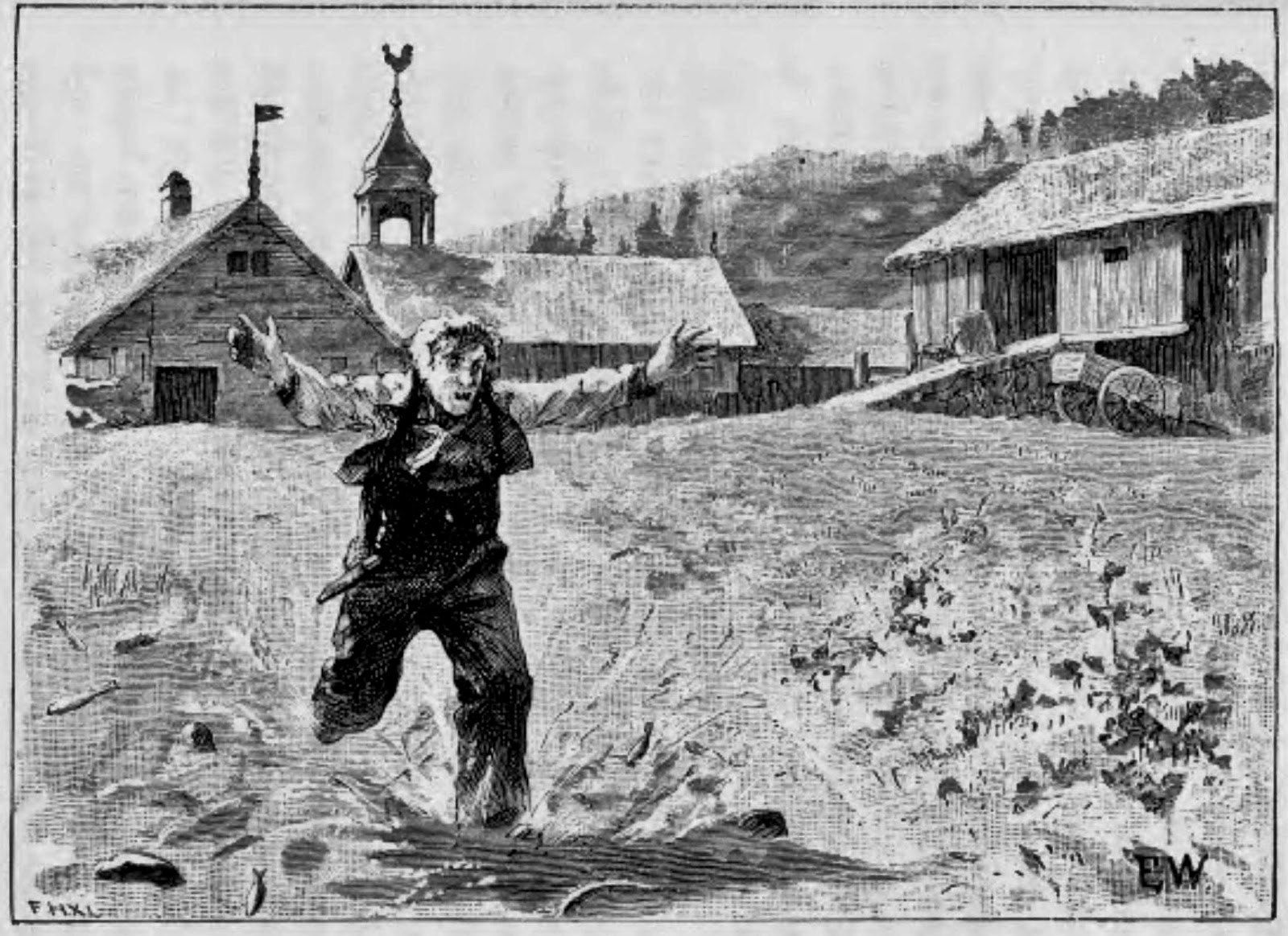 Now, the woman, who was turning the hay, thought that the meal was taking too long to make ready. “If my husband does not call us home, then we shall go anyway; he cannot cook gruel very well; I must help him,” said the wife to the haymakers.

Well, they wandered homewards. But as they came up the hill a bit, they met herring and gruel and bread, all mixed together, and the man himself before the flood.

“I wish each of you had a hundred bellies! But watch out that you do not drown in the gruel,” he screamed as he ran past them, as if the evil one were on his heels, down to where his brother lived. He bade him for God’s sake to take the quern back, and that immediately; “if it mills for another hour, then the whole village will be lost to herring and gruel,” he said. But his brother would not at all take it back before the other had paid him three hundred dollars, and so he had to.

Now the poor one had both money and the quern, and so it was not long before he had built a farm much finer than the one his brother lived in; with the quern he milled so much gold that he clad it in bare gold plates, and this farm lay close by the seafront, and gleamed and shone far out across the fjord. All who sailed past had to drop in and greet the rich man in the golden farm, and everyone wanted to see the wondrous quern, for word of it spread both far and wide, and there was no one who had not heard of it.

After a long, long time, a skipper came, who would also see the quern; he asked if it could mill salt. Yes, of course it could mill salt, said he who owned it. And when the skipper heard this, he wanted the quern, by fair means or foul, whatever it cost; for if he had it, he thought, then he would not have to sail far across the sea and waves for a cargo of salt. To begin with, the man would not be without it, but the skipper both begged and pleaded, and finally he sold it, and received many, many thousands of dollars for it.

When the skipper had got the quern on his back, he did not stop long there, for he was afraid the man would change his mind; to ask how he should stop it, that he had no time at all for. He went down to his ship as quickly as he could, and when he had come a little way out to sea, he took out the quern. “Mill salt, and that both quickly and well!” said the skipper. Yes, the quern began to mill salt so that it flew. When the skipper had a full ship, he would stop the quern, but however he behaved, and no matter how he treated it, the quern continued to mill in the same way, and the heap of salt grew higher and higher, until at last the ship went to the bottom.

There stands the quern on the bottom of the sea, milling, even until today, and that is why the sea is salty.

Author of Tales of Eldelórne trilogy and all around artist and geeky chick.

What you need to know about Tales of Eldelórne: Book One

Tales of Eldelórne: Book One